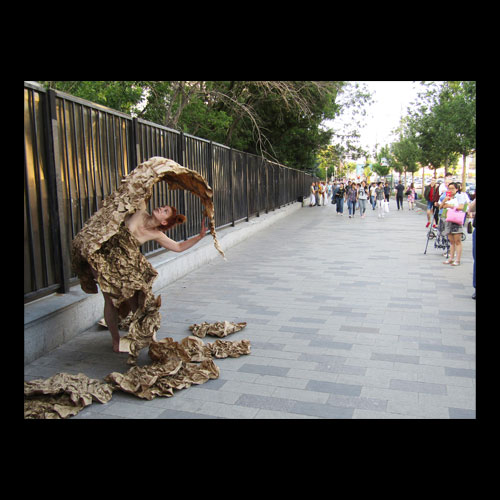 The | destroy revisited | is an outdoor performance. It is a study that approaches conceptually notions of transformation, transition and alteration between matter and the human body. The project explores the urban experience as well as the organic creation of sound from: the urban environment, body movements and material (recyclable paper). At the same time it deals with notions of sensory study and development of perception, such as hearing and touch.

Few words about the artist: Nefeli Myrtidi is an interdisciplinary artist, her artistic work includes performance, installations, sound, video and photography. In 2015 she was awarded the “European Opera directing prize” for | Weisse Rose | at Theatro Real in Madrid. She collaborated with Volksbühne (2010 – 2014, under the Artistic Direction of Frank Castorf) and the University of U.D.K-Department of Choreography – in Berlin. Her music training often met with the performing arts with the most important station, the Cologne Opera. As a member of Opera Europa, she has given lectures on the overall re-approach of opera, using new media (Opera Conference Madrid-Berlin, Deutsche Oper). Her practice shifts from performance to installations and photography and her artistic research deals with issues of sensory study and perception as well as urban experience. Her works such as | sculpture | have been hosted at the Athens Biennale 2017 as well as at the Kappatos Gallery | underwater acoustics |. Represented the National Participation of Greece in the National Historical Museum of Moscow with the performance | destroy revisited | and at the International Festival, Prague Quadrennial 2019, with the project | Transformations | He has collaborated with the Onassis Foundation (2020). Her works are hosted at MOMus (Metropolitan Organization of Museums of Fine Arts of Thessaloniki) for the photo exhibition “Anthropause” with the work | deleted space |