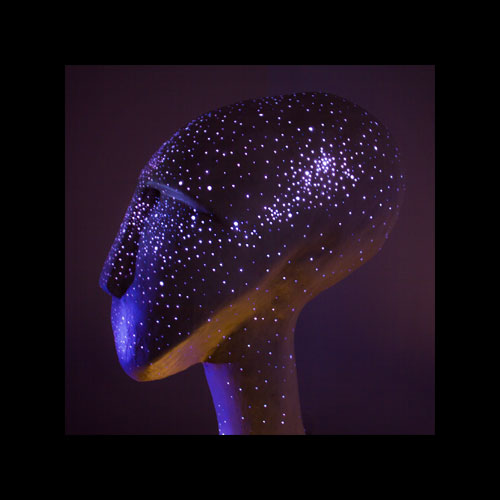 “Don’t Touch Me” is an interactive sculpture that investigates the relationship between human and machine. Following the previous sculpture  “Touch Me”, where the visitor is invited to touch it and interact with it, this sculpture rejects and finally disallows physical contact. When the visitor approaches its surface, it starts to emit alarming color light and sound. The pitch of the sounds is getting higher as the “intruder” gets closer. If he/she touches it, it blinks in a bright red colour and turns off. After a while, the sculpture activates again.

The white color and the form of the sculpture are inspired by the ancient Cycladic idols with a strong reference to the Sci-Fi futuristic culture.

“Don’t Touch me” attempts to explore the difficulties of human-machine interaction. People are surrounded by touch technology and they are used to interact with it in many different ways. After so many haptic devices that surround us in everyday life, how ready are we to be rejected by a machine?

A few words about the artist:

Yiannis Kranidiotis is an artist whose work explores the relationship between science and art using mainly light, motion and sound to create spaces and experiences where all coexist and interact. He is interested in physical phenomena like the harmonic oscillation, the natural repeatability and the wave movement and also in exploring and transforming scientific data, like the properties of the exoplanets or the solar wind. The increasing pollution of the planet with plastic and the effects on the oceans and on the environment in general are issues that also affect his practice. Many of his works include motion and interaction where others include data processing and sonification methods. This requires cross-disciplinary work with sound, visual arts, coding, electronics and physics. He has a BS in Physics from the University of Patras and M.Sc. in Optics from Essex University.