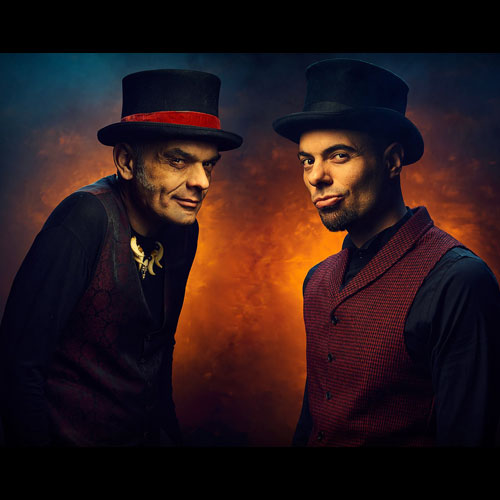 Quotes and sayings are combined with compositions by great Greek and foreign poets and how ancient greek tragedy affected the modern cabaret.

The passage from the ancient wisdom to the anonymity of the younger. The eccentric duo presents in its new show the transition from ancient times to modern times. From Aristophanes and Socrates to Empirikos and Varnalis. From Dionysus to Tom Waits.

Tenorman hits the keys screaming, while Voodoo hammers the drums. Bold texts are heard on Greek rhythms that culminate in a DIONYSIAN CABARET.

A few words about the artists:

OperaChaotique has appeared in 19 countries in its 10 years of existence. With soldouts at the National Opera, Thessaloniki Concert Hall and Athens Festival, they have collaborated with important artists from Greece (D. Savvopoulos, L. Machairitsas, M. Paschalidis etc.) and the rest of the world (NouvelleVague, TheTigerLillies, Ojosde etc.). They have just released their 4th album and first Greek-language album entitled “On the edge of your burning lips” by OgdooMusicGroup.