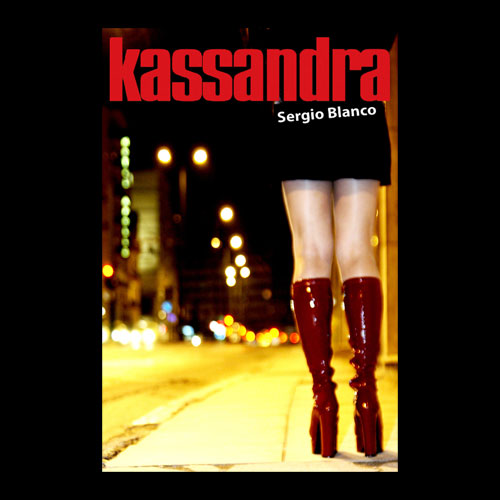 A heartbreaking and comic monologue of Sergio Blanco who was inspired by Athens and wrote about the actress Despina Sarafeidou. Kassandra unfolds her Odyssey, wearing red shiny boots. In her fluent English, she speaks of our search for meaning and hope. War, power, winners and losers, sex, humor and sarcasm. Euripides and Bugs Bunny, Abba, Manchester United and Scarlett O’Hara. The distance between myth and reality, actor and spectator, space and speech, collapses. In Blanco’s monologue, the mythical Kassandra becomes a man who feels like a woman, a modern trans immigrant who struggles for survival, in a constant search for identity – exiled in her body, foreign to every homeland.

Few words about the artist: Sergio Blanco was born in Montevideo, Uruguay in 1971. He studied literature and theater in his homeland and worked as an assistant director alongside prominent Latin American directors (Atahualpa del Cioppo, Antonio Larreta, Nelly Goitiño and Filho). He later directed in his country the plays of Richard III and Shakespeare’s Macbeth and Edmond Rostan’s Syrano de Bergerac. In 1993 he was honored with the prestigious Florencio Revelación Award which gave him the opportunity to go to Paris and study directing at the Comedy Franchise with fellow directors such as Alain Françon, Georges Lavaudant, Daniel Mesguich and Matthias Langh. From 1993 to 1998, his artistic activity was shared between France and Uruguay. Eventually, in 1998, he settled permanently in Paris – where he still lives – and began writing plays.